Play Claytomancy!
Post Jam Build (recommended) | 2020-02-20
• Major bug fixes
Global Game Jam Build | 2020-02-02
Role
Project Manager, UX/UI Designer
Ideation
Once the theme of "repair" was revealed, my group of strangers—2 artists, 1 sound designer, 3 programmers and myself—took the time to become well acquainted and set up our ground rules and expectations for the weekend. We agreed on the importance of keeping health first and respecting everyone's goals, since some of us wanted this game in our portfolios, while others already in the industry came out to have fun!
We then held a 10-minute brainstorming session, followed by sharing our ideas. Everyone gravitated to one idea in particular:
In The Legend of Zelda, Link breaks pots to get rupees. But what if the villagers were fed up with this behaviour? What if everyone in the village pleaded with the local potter to make indestructible pots using shards of the broken pottery? What if the pots could fight back? AND HAD LASERS?!
😮
We had our story hook!  Into Friday night the programmers and I developed the mechanics while the artists researched aesthetics and sketched ideas. We decided as follows:
•  The game would have a circular elemental strength/weakness system with 5 types:
fire < water < thunder < air < plant. (We started with 3 types, but thought this could make the game too short and result in the player winning on their first try.)
•  The hero would have one randomly generated elemental type.
•  After the pot was defeated by the hero, a villager who "saw it all go down" would return the broken pieces of the pot to the player, giving clues as to which pieces took the most, average, or least damage. The player would receive the most clay from the least damaged pieces, and the least clay from the most damaged pieces.
•  The broken pieces of clay were to be added to the player's clay bank, and could be spent to add new parts to the next pot.
•  This process of combat and rebuilding would be repeated until the Hero was defeated.
Action
I started with creating the information architecture of the game. This was referenced by the programmers and sound designer to help scope out their tasks.

The sound designer used the IA to scope out the number of sounds for interactions and songs for screens, while the programmers used it to determine the number of screens and screen components needed.

On Saturday, I created wireframes for the different screens of the game: the Main Menu, the dialogue/post-combat screen, and the Crafting screen. By Saturday midday I had rushed along to most of the icons and UI and pushed them to GitKraken. 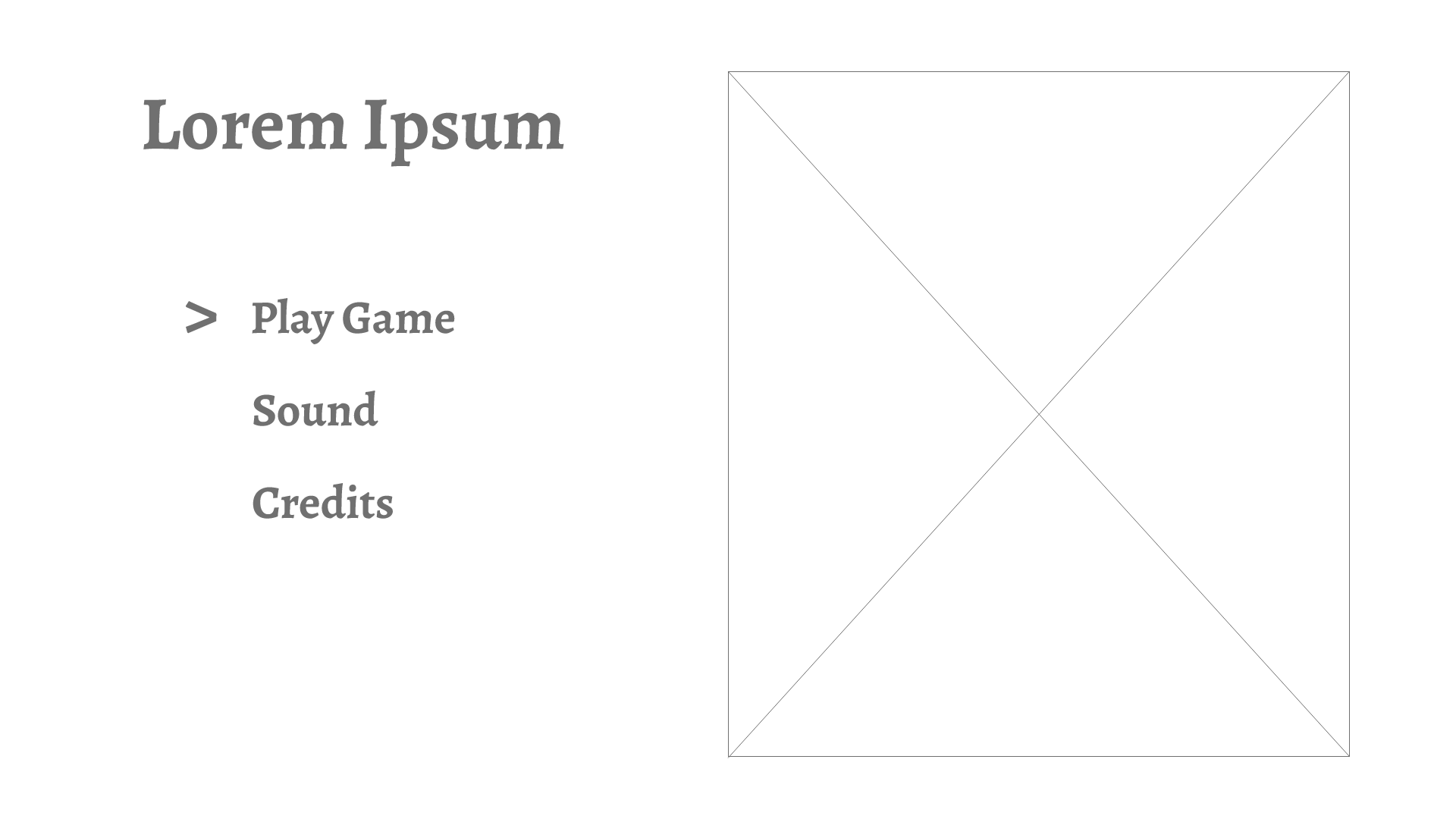 What players would see upon game launch. We forgot to give them a way to exit the game! Alt+F4 to the rescue... 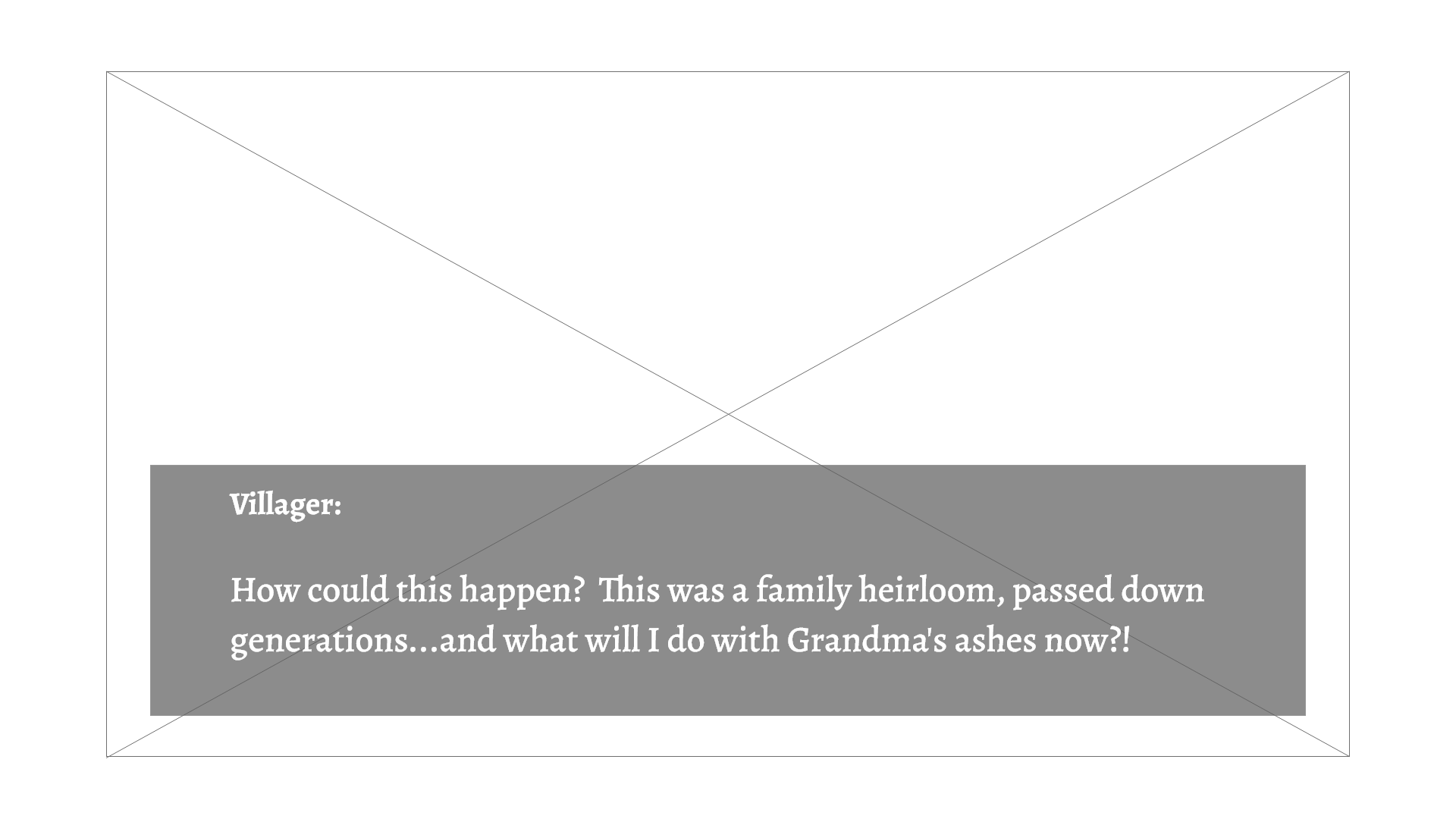 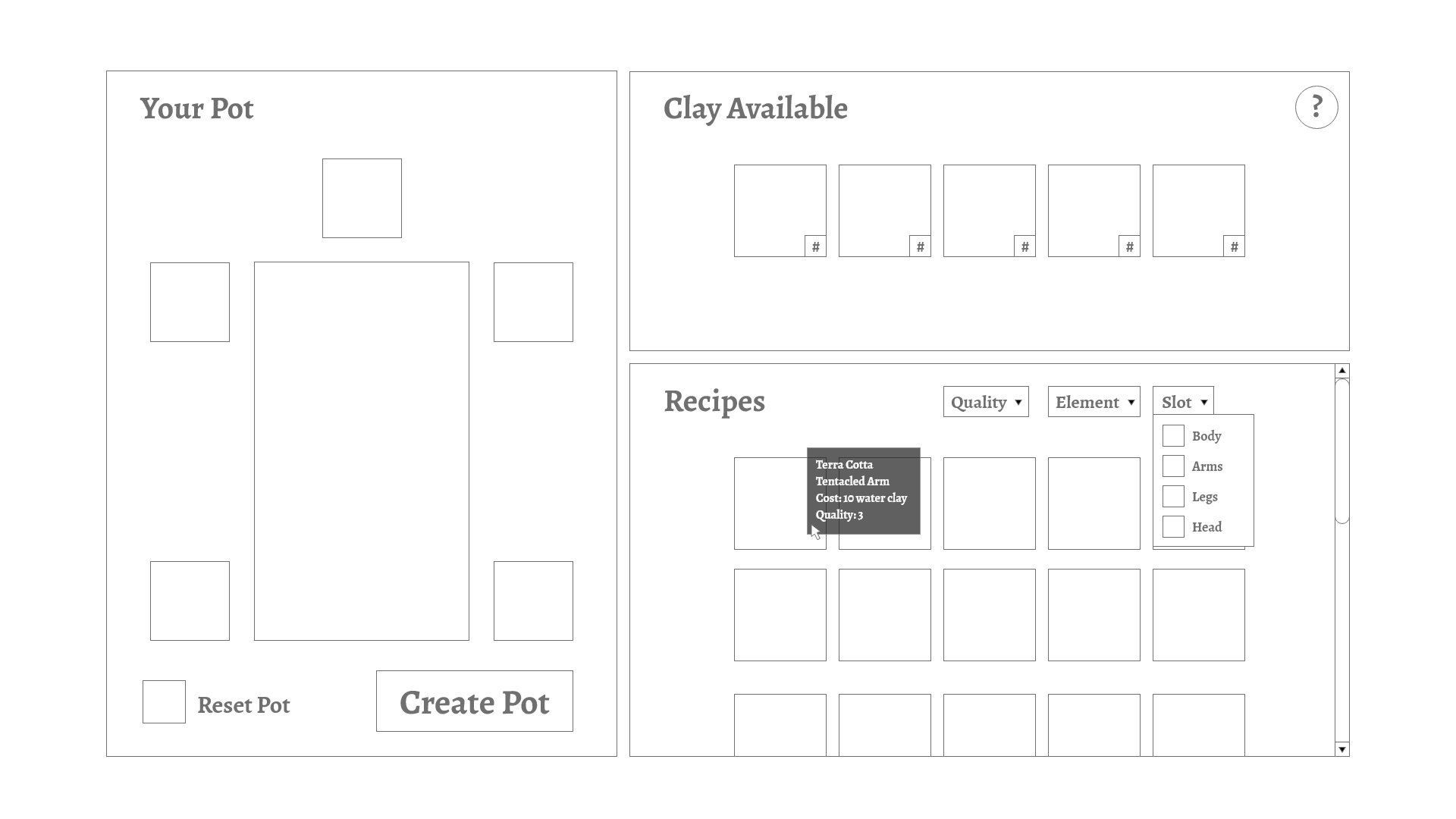 Crafting page — what's wrong with it? One of the programmers clued me in that the scroll bar for Recipes was too long since the filters would be sticky! 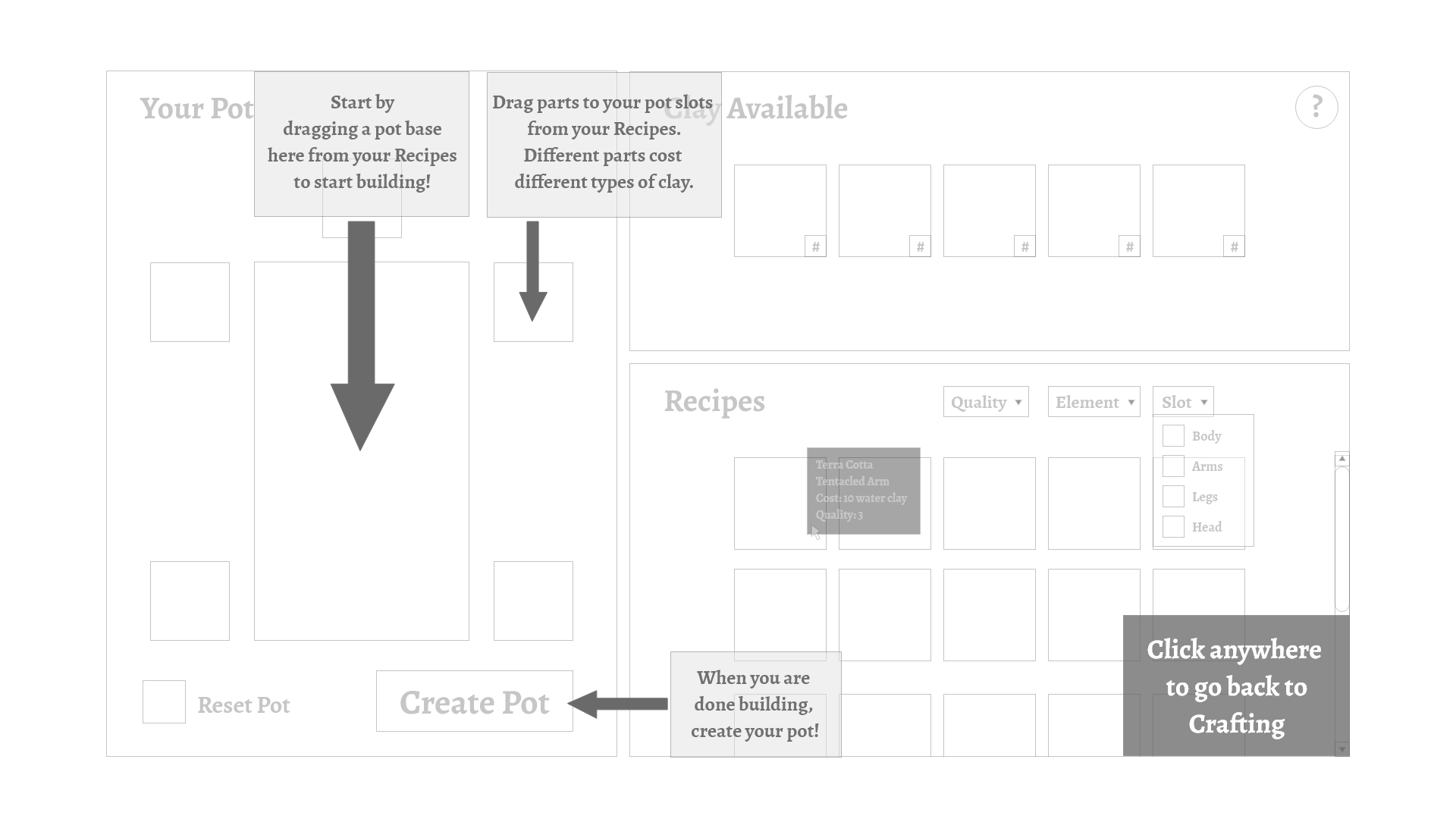 We needed to tell players how to play our game, and while the overlay showed what to do we had run out of time to be able to explain the type advantage system! 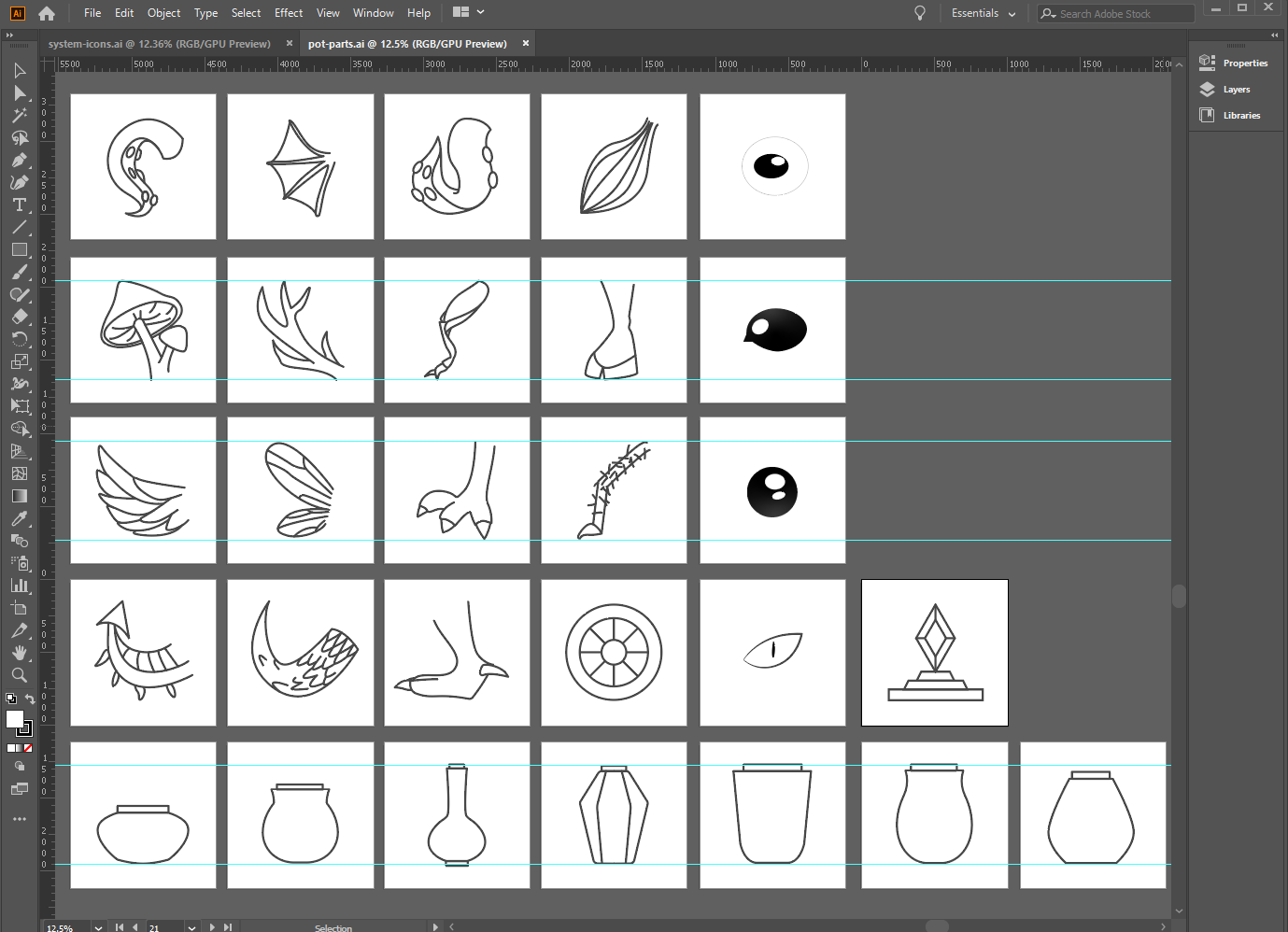 Pot parts I digitized from an artist's sketches!

By Sunday morning, we had exported most assets into the game and were focused on integration. We barely finished our first build before the start of the upload deadline and spent the rest of the afternoon fixing bugs.
Outcome
Since we were not able to fully implement the tutorial, we had to explain the type advantages to the judges or interested players before they could play.  The judges were impressed with the way the clues were given by the villagers, and the element type advantage system.
For the purposes of the Jam, we made several concessions, such as:

•  Making sure it was impossible for the player to run out of clay currency to work with, so they could build whatever pot they wanted. A final build would have introduced more scarcity with resources.

•  Simplifying the win condition. With more time we could have better balanced how many parts of various types would be needed to overpower the hero. We even entertained the hero being able to change their type after their first brush with death, or having multiple types to begin with!  These ideas actualized would have made the game longer and more challenging.
•  Omitting the lasers, much to our dismay. 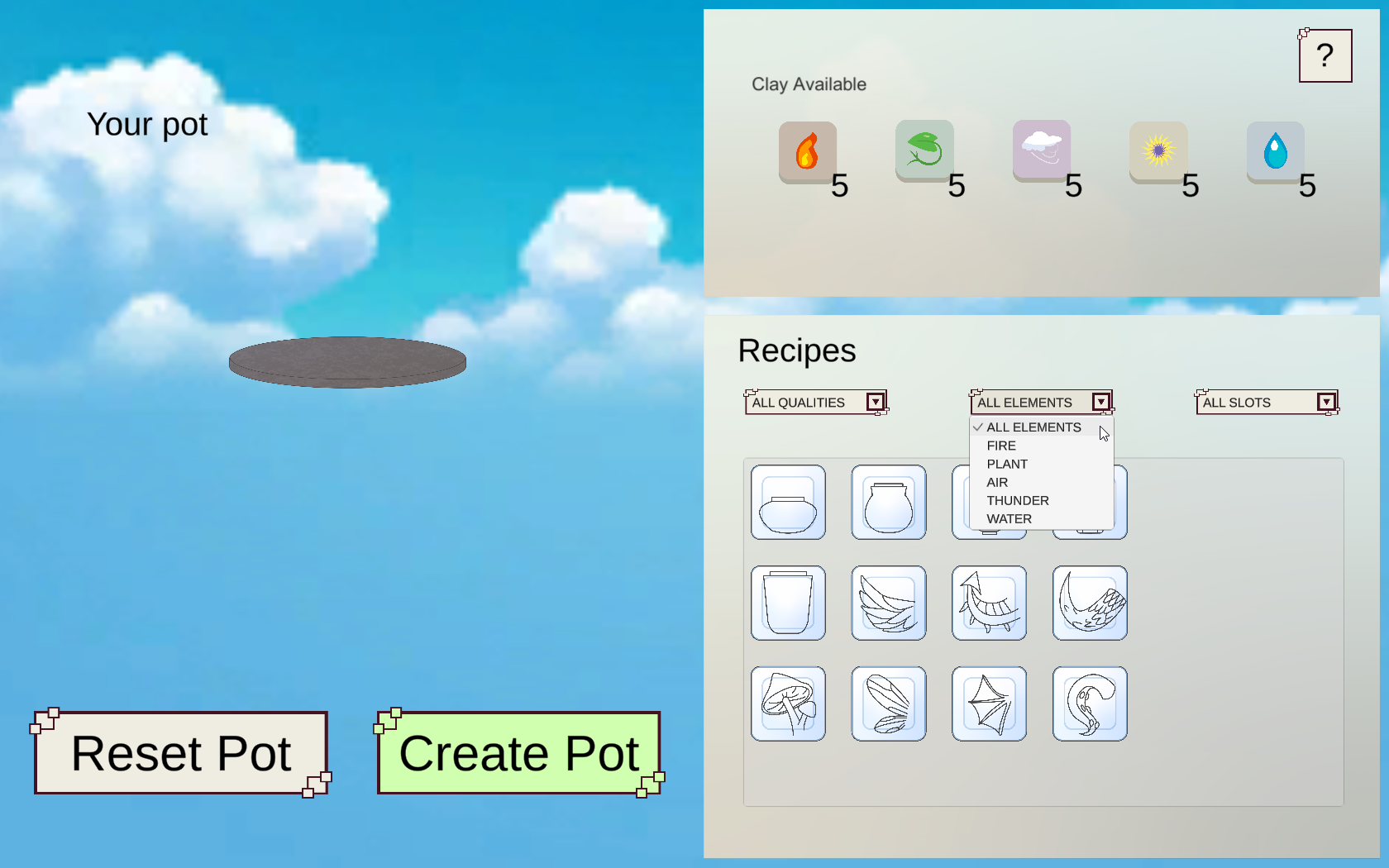 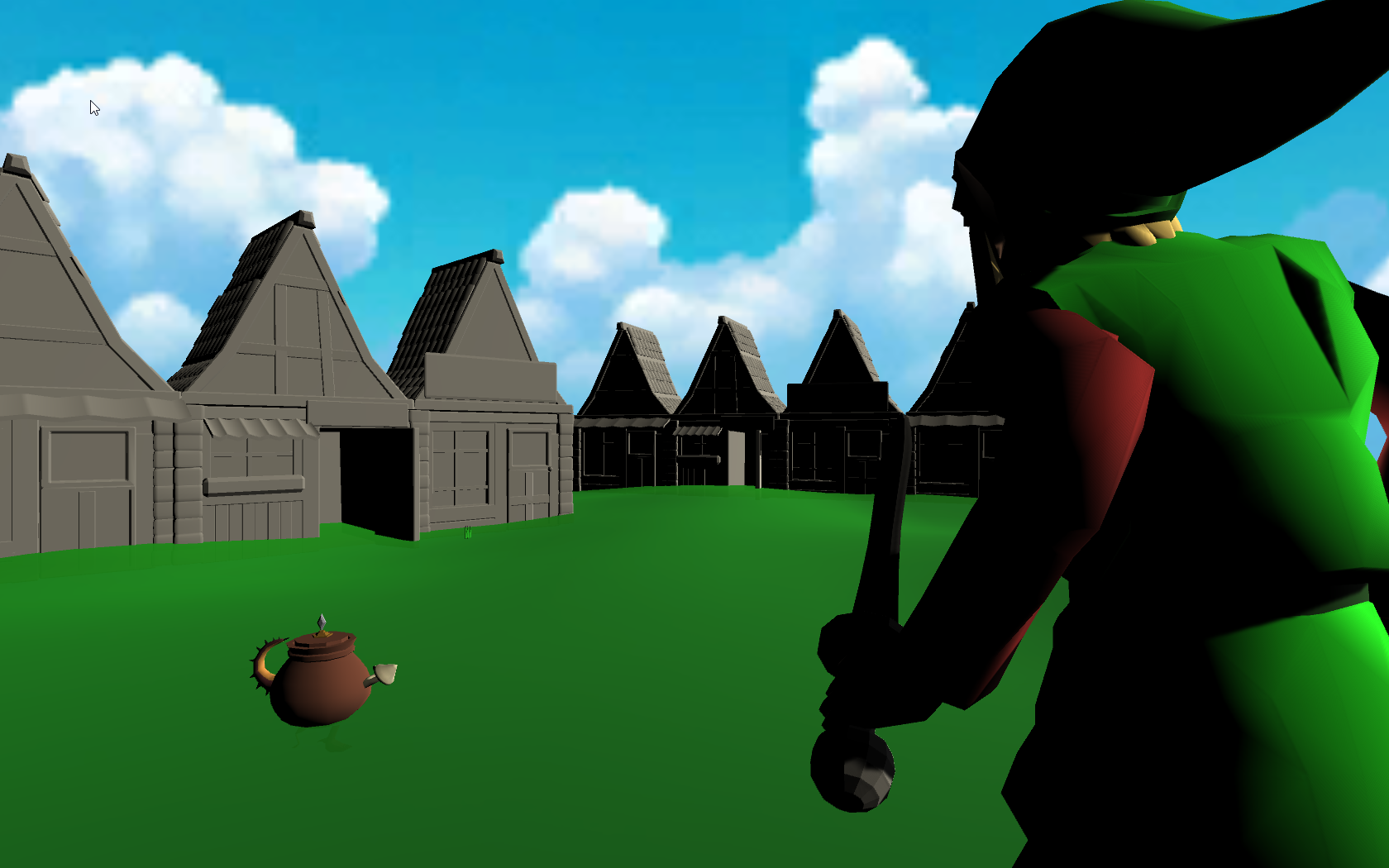 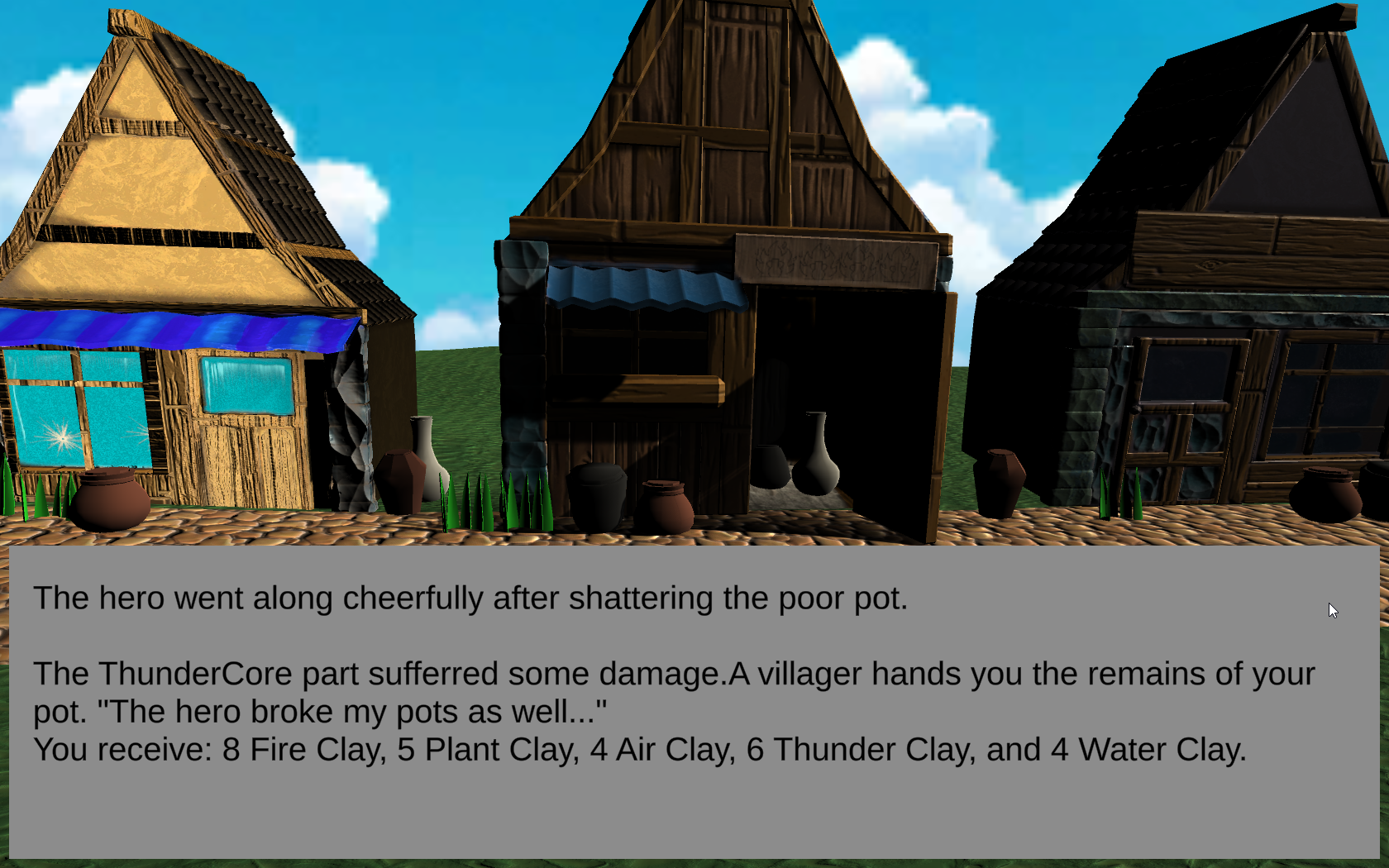 Reflection
Game jams are wonderfully stimulating and creative environments. Temporarily eating and sleeping poorly for the sake of a singular goal took me back in time to my university days!  I'm grateful to have had a mostly female team that was excellent at decision-making; one of our industry programmers repeated how impressive it was we had decided on the theme and rough mechanics on our first night.
I learned several lessons during the jam, and afterward, when I played other submissions.
1. In an Unstructured Event, Teammates Choose Their Level of Cooperation
Everyone comes to game jams to learn and practice skills at their own pace. Some teammates will be very open to collaboration and regular check-ins while others will prefer to work autonomously with minimal input. While the team quickly anticipated issues that would hold up development and discussed ways to address blockers, we would have created a negative environment by pressuring specific teammates into changing their priorities while the spirit of the event encouraged experimentation! The predicted bottleneck happened, and therefore we did not have a playable game until Sunday afternoon. We adapted by cutting features in order to increase time fixing bugs.
During the weekend, I also had to carefully assess when to suggest alignment meetings, and take it in stride if the meeting deteriorated as teammates identified problems and promptly checked out of meetings to address them.
2. Allow Your Players to Quit Your Game Without Alt+F4 (whoops!)
3. Fun and Functional Jam Submissions Had Things in Common
After playing some of the other games, I noticed several patterns:
•  Games that were illustrated in 2D overall had more gameplay and story. Games made in 3D had less.
•  Games that were rich in story had simpler or recycled gameplay mechanics.
•  Games with recycled concepts tended to be better executed, especially when teams made the effort to put a creative spin on them. One game had a minigame with a maze; I needed to collect dots that kept the maze lit, taking care not to move too quickly and slide past turns.
•  3D games had the funniest bugs!  Picking up a chair in one game transported me through a wall and into the Unity overworld.
•  Both big and small teams made compelling games.
I look forward to participating again in 2021!
Download Claytomancy
Post Jam Build (recommended)
Global Game Jam Build